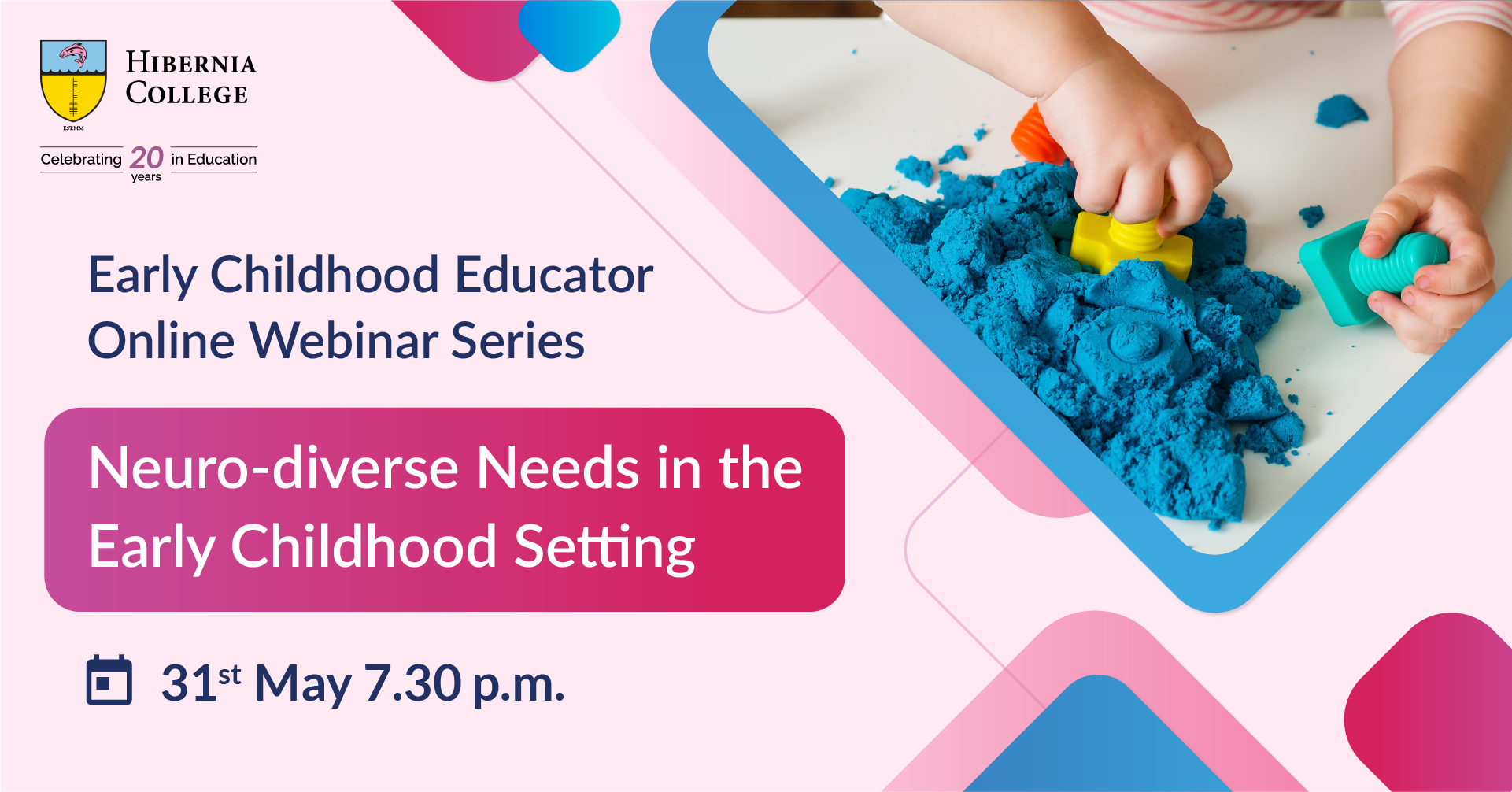 This webinar will support early childhood practitioners in their practice. Topics covered will include supporting communications and self-regulation.

The webinar will be presented by Dr Carol-Ann O’Síoráin. Carol-Ann is a member of INHEF and is leading the Bachelor of Education Early Childhood Education Programme at Hibernia College.

Guidance to an Independent Adult Life 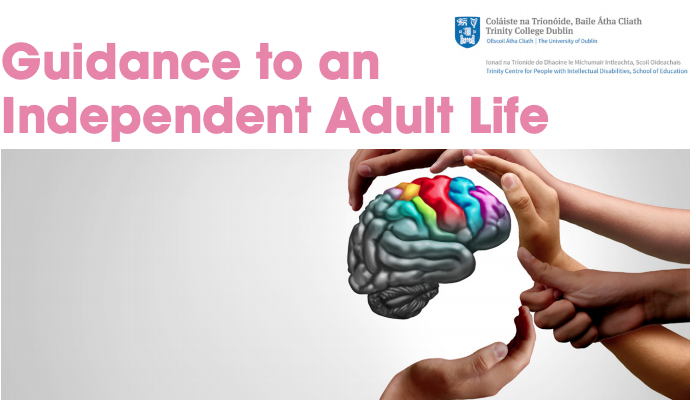 Published by the National Centre for Guidance in Education

In this article, Des Aston of the Trinity Centre for People with Intellectual Disabilities (TCPID), provides an insightful reflection on Post-School Transitions for Students with Intellectual Disabilities in the Republic of Ireland. Students with Special Educational Needs and in particular those with Intellectual Disabilities require a spectrum of additional supports to complete post-primary school and consider their own future education, career and life options. Recommendations within the report, referenced here, provide an opportunity for school management to consider their lead role and obligations under both the Education Act (1998) and the Education for Persons with Special Educational Needs Act (2004), where the benefits of a whole school inclusive ethos include co-operation and co-ordination between whole-school guidance and special education needs supports.

Major ‘transition planning’ for students with disabilities to progress to college. [via Irish Times, 20th May 2021] 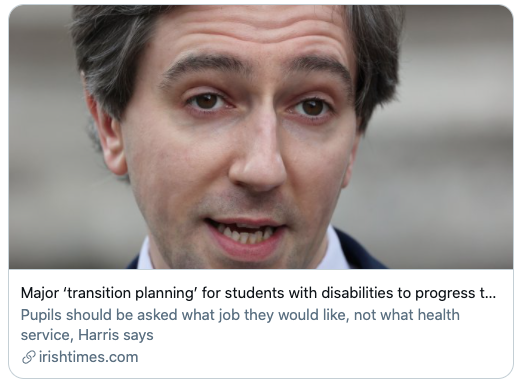 Published in the Irish Times 20th May 2021. Marie O'Halloran

Minister for Further and Higher Education Simon Harris has announced as a “major priority” transition planning for students with learning disabilities to move into further education and employment.

The project, to be completed by September, will also include a “mapping exercise” of existing facilities and examples of good practice for further and higher education.

A national access plan for students into further education after secondary school is also under way.

Mr Harris said in the Dáil that too often the “discussion is too narrow” for pupils with disabilities when they leave school.

“We’re narrowing the conversation and almost sometimes suggesting their educational journey must end when they leave school.”

He had met Down Syndrome Ireland and parents “who said that in some cases not only are they not seeing their child progress when they leave school but actually seeing their children regress”, Mr Harris said. “What a horrific thing for a parent to have to say.”

He stressed that there would be “transition planning, a mapping out of what is there and then a scaling up of it”.

Mr Harris told Fianna Fáil TD Michael Moynihan that he would work with Ministers of State Josepha Madigan and Anne Rabbitte to develop the transition planning which will be presented to the Cabinet sub-committee in September.

The Minister said there were “some really good examples of good practice out there” including the Trinity Centre for People with Intellectual Disabilities.

“They’re taking students in with intellectual disabilities, straight from school and getting them into Trinity College,” from where they leave with an award and are linked with employment.

He also cited the National Learning Network in his Wicklow constituency which runs a number of programmes through its Rehab groups.

Mr Moynihan said it was important to have development and a pathway for people right throughout the regions, pointing out that the Trinity access programme was centralised in urban area.

“You need to assess the needs in the community and how many people are falling through the cracks, because the system isn’t built enough to integrate them, to encourage them and to ensure that they can go on to education to the best of their ability.”

The Cork North-West TD also urged the Minister to “look at those who have been left behind heretofore as well as those into the future” to see if they can be rehabilitated.

Mr Harris said that while he cited Trinity College, there were similar programmes in other colleges, adding: “Why not in every other university across the country?

“We will use the education and training boards, colleges of further education, the higher education institutions. We’ll engage with disability stakeholders, we’ll link with the Department of Education. This transition planning is absolutely crucial.

“And we will get this done because this is a major, major priority for me, for my Department and for Government as a whole, and we’ll feed it into the development of the new national access projects.”

Mr Harris said they were “out to consultation” at the moment. He said that while they were hitting targets, he believed that was because the targets were set too low.

He added that he did not believe they were measuring enough types of disability.

A Pathway to Adulthood for People with Intellectual Disabilities.

A Critical Reflection on the Development of Rights Based Education Programmes for people with Intellectual Disability in Further and Higher Education.

Launch of renamed REACH : Journal of Inclusive Education in Ireland 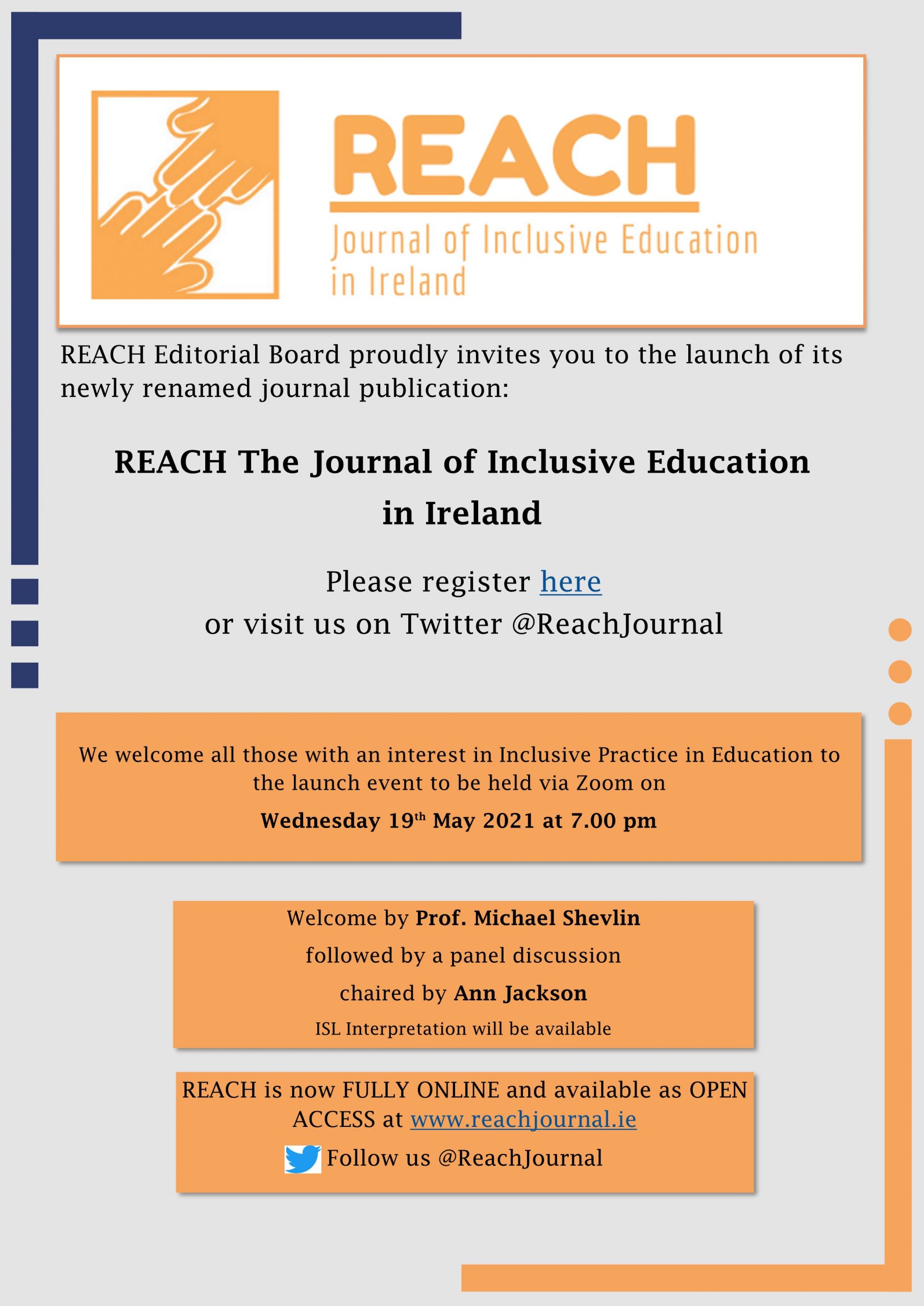 The Editor and Editorial Board of REACH ( formerly the Journal of Special Needs Education in Ireland)  are pleased to announce an online event at 19:00  on Wednesday 19th May 2021 to mark the renaming of  REACH as the Journal of Inclusive Education in Ireland. The new title will more accurately reflect the national and international research and policy landscape and the scope of the journal. and the move to open access online publication. REACH provides an opportunity for those involved and interested in inclusive and special education to publish articles based on their practice, research and experience. Therefore we are delighted to announce that REACH now has a full online presence and is freely available online in open access format at reachjournal.ie.

Professor Michael Shevlin will make a short welcome address reflecting on inclusion in Irish education, the place of practitioner research in progressing this and the supportive role of the journal. A panel of invited guests will consider and debate the function of REACH in 2021 and how the online open-access format can contribute to the discourse around the education of students with additional needs.ISL Interpretation will be provided.